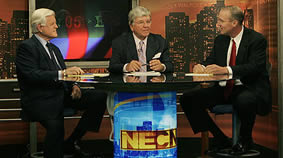 Your host at Conservative Tours is Kenneth G. Chase, who was the Republican Nominee for U.S. Senate in Massachusetts in 2006. He won his party’s convention and subsequently the primary by proudly standing for a  conservative agenda.

The conservatism of Chase could not be in greater conflict with the agenda of his opponent in the general election: Ted Kennedy (see debate photo.) Not only did most people feel Chase won his debate against the liberal icon, even the left leaning Boston Globe admired the way Chase took the fight to Kennedy!

Ken Chase has been fighting for nearly 30 years on behalf of Republicans everywhere. When no one else dared Ken Chase went into enemy territory and debated one on one against the angry liberal Barney Frank in 2004. One hour, non-stop, defending Conservatives against the embodiment of left wing extremism, and some experts felt Chase handed Barney Frank the only defeat he’s ever known in public!

Ken Chase remains active in politics, primarily doing political analysis on radio and TV. He did regular commentary on the presidential race starting in January, 2007, when he created Presidential Scorecard on WHYN in Springfield, Mass, a weekly appearance on the leading talk radio show in western Massachusetts. Since the November election he continues the weekly episode on WHYN, discussing national and international issues.

Conservatives from Ken’s neck of the woods tend to have real jobs in the private sector; and for the last 14 years Ken has run The French & Spanish School, Incorporated. In a typical year, the school teaches foreign languages to nearly 400 American students.

Since 1981, Ken has been visiting friends and family in France, Spain and Belgium and at times heading across the pond for work in his capacity as head of The French & Spanish School or to do political analysis. He knows Paris and France like the back of his hand and frequently visits Spain and Belgium, and now he’s going to share his knowledge with you! He mastered the French language as a young man enrolled in a French university and the friends he’s made help make Conservative Tours what it is today, a way for true American Conservatives to travel in luxury, together, with a trusted friend who knows the terrain and the language!